Neil McCauley was a career criminal who had spent half his life in prison before staging a series of robberies in Chicago in the 1960s that led to his death in a street shooting with police.

On March 25, 1964, Chicago police were in position outside a convenience store on the southwest side of the city, ready to shoot Neil McCauley, a career criminal who had been released from federal prison two years earlier.

The police were led by a detective named Chuck Adamson, who had recently met McCauley over coffee and infiltrated his gang. He knew that McCauley and his team planned to rob the store because it was the day the clerks were to receive a large cash delivery to exchange for checks.

But even though McCauley had already quit a job when he learned Adamson was all over him, he had no idea how surrounded he was. Nor that his life story would later become Michael Mann’s 1995 crime classic Heat.

With criminal Neil McCauley (Robert De Niro) and the cop who pursues him, Vincent Hanna (Al Pacino), Heat was inspired almost beat by beat by a series of real events that unfolded between the real Neil McCauley and Detective Chuck Adamson – until their epic encounter and a final, fatal gunfight.

Neil McCauley was born in Polk, Iowa, on February 2, 1914. By the time he was released from prison in 1962, he had already spent 25 years behind bars, more than half his life. He had spent eight years at Alcatraz, four of them in solitary confinement.

Before McCauley was released from prison in 1962, Detective Chuck Adamson of the city’s major crimes unit had a hunch about him, according to Film School Rejects.

Adamson knew Neil McCauley wouldn’t give up a life of crime when he walked out of the prison gates and landed in Chicago. He would continue to do what he does best: assemble a team to keep score. Adamson would keep an eye on him.

Then, after McCauley robbed a factory manufacturing his diamond drill bits (a robbery also included in Heat), Adamson infiltrated his crew and placed McCauley under 24-hour surveillance. Soon, this surveillance paid off when Adamson got wind that McCauley had assembled a team of criminal associates to rob a Chicago department store. 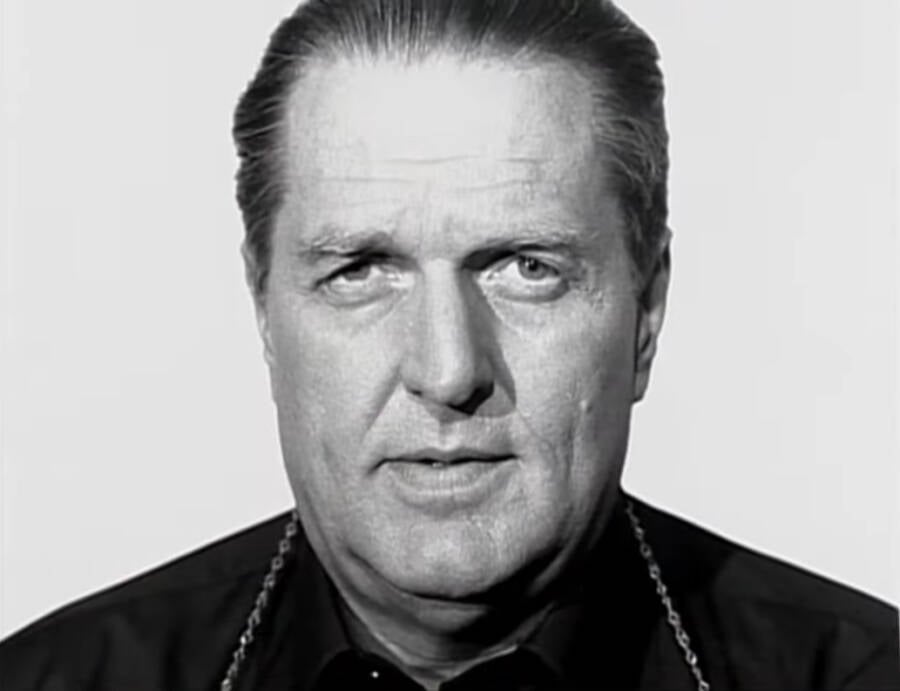 In the days leading up to the robbery, Adamson and his officers had seen Neil McCauley’s team perform a dry run to monitor the department store. McCauley, the accomplished professional that he was and leaving nothing to chance, had noticed everything: the layout of the parking lot, the number of cars present at the time, and even the store windows.

So Adamson assigned officers to cover the outside, out of sight. Two detectives had held positions in the store. Everything had been covered.

For hours, the night of the burglary passed without seeing Neil McCauley. Then the Adamson police radio crackled. McCauley and his crew had arrived. Officers watched as the men entered the rear of the building and descended into a basement, where they waited – and listened.

How Chuck Adamson grew to admire a thief 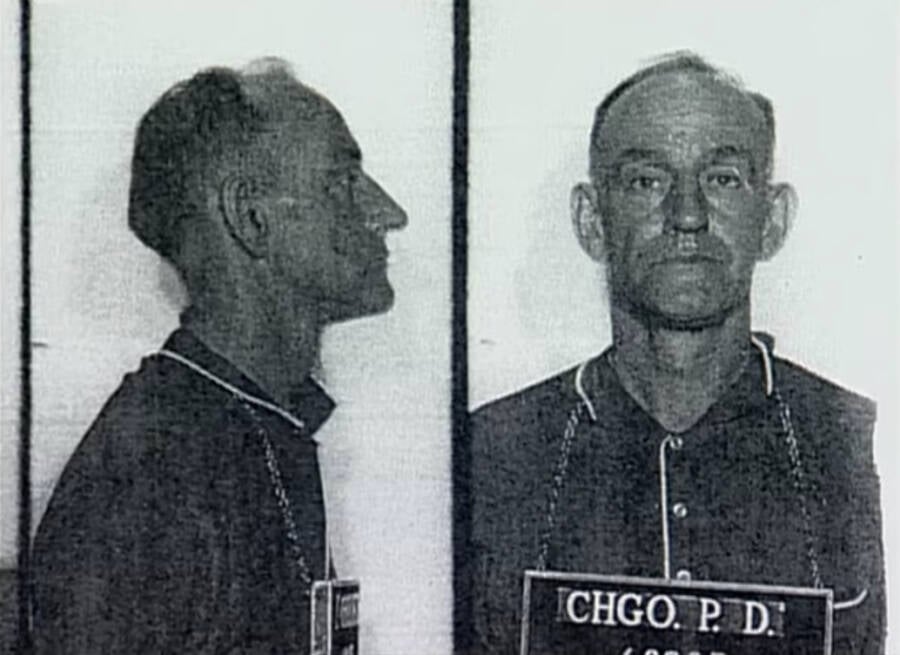 The photo of Neil McCauley, taken on March 2, 1964, just three weeks before the robbery that killed him.

Chuck Adamson had given the two detectives hidden inside the store specific instructions: do not move under any circumstances, regardless of the number of hours spent, according to an interview he gave in 2005.

On duty for five or six hours, one of the detectives couldn’t wait any longer. He got up and crossed the floor towards the toilet.

McCauley heard the above move and halted the entire operation, a job he had spent weeks planning and a considerable amount of money arranging.

McCauley had too many years of criminal experience to know that unfamiliar sounds in a seemingly empty department store spelled trouble. The sliding scale of risk versus reward had now swung in someone else’s favor.

For Neil McCauley, all was not lost. Now he knew the police were on to him.

For Chuck Adamson, this sparked admiration for McCauley’s professionalism. He knew it took tremendous self-discipline to walk away.

These events resulted in a pivotal scene of Heat: the undercover police operation where Robert De Niro’s McCauley stands guard outside the warehouse, where inside, a member of his crew breaks into a safe.

Unbeknownst to De Niro’s McCauley, Al Pacino’s Detective Vincent Hanna and officers wait inside a shipping container watching events from a live infrared surveillance feed. A policeman decides to sit in a corner, his gear thudding as he meets the edge of the container. McCauley looks at the container, knowing something is wrong, and abandons the job.

Meeting of Neil McCauley with Chuck Adamson over coffee 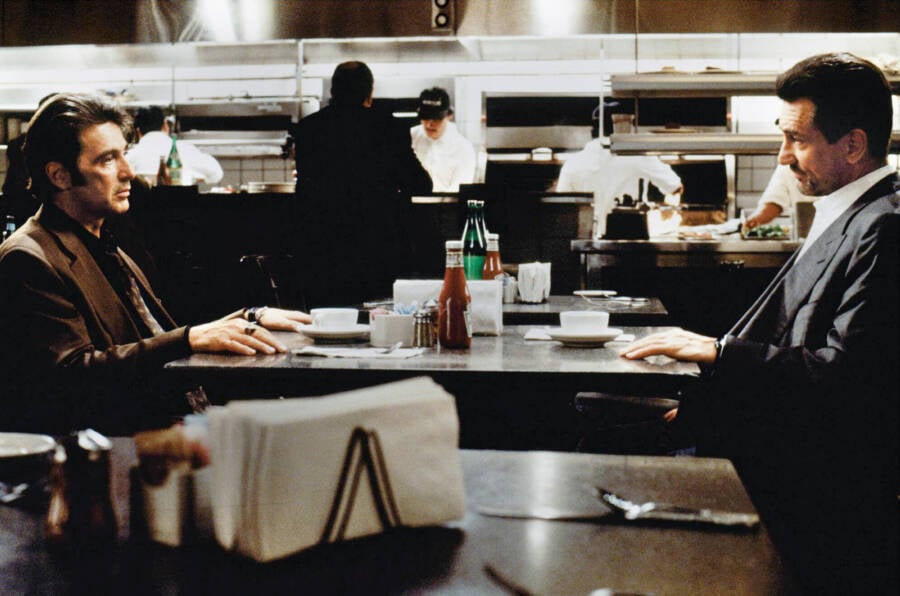 Still, the aborted department store robbery wasn’t the only real-life story Neil McCauley made of it. Heat. In fact, her entire relationship with Chuck Adamson formed the basis of the film, including their one coffee meeting.

The duality of a hardened professional criminal sitting with the police detective who obsessively pursued him caught Michael Mann’s interest when Chuck Adamson first told him about it when the two met in the 1970s. according to Steven Rybin’s 2013 book. Michael Mann: author of the crime.

Adamson, long retired from the Chicago Police Department, now worked as a technical consultant on the movies. Mann and Adamson had first collaborated on Mann’s 1981 film Thiefusing Adamson’s insider knowledge of the modus operandi and tools of the trade in the underworld of Chicago’s professional thieves.

Chuck Adamson replaced the character of Vincent Hanna played by Al Pacino, but he still invited the real Neil McCauley over for a cup of coffee. The heart of their conversation that day was pragmatic and precise in Adamson’s account:

Adamson: “Why don’t you go somewhere else and cause trouble?” Adamson asked.

Adamson: “You realize one day you’re going to score, and I’ll be there.”

McCauley: “Well, look at the other side of the coin. Maybe I should take you out.

McCauley and Adamson recognized each other. They both saw the mirrored traits they shared and the motivations that drove them. Relentless, detached and self-disciplined. Although they knew neither had any illusions about the other.

Adamson admired McCauley’s criminal conscience and aversion to taking unnecessary risks. He wasn’t about to cut her slack. In the restaurant scene of Heat, McCauley lays out his disciplined criminal philosophy. He was ready to give it all up once he felt “the heat around the corner”.

The Last Supermarket Robbery and the Shooting of Neil McCauley 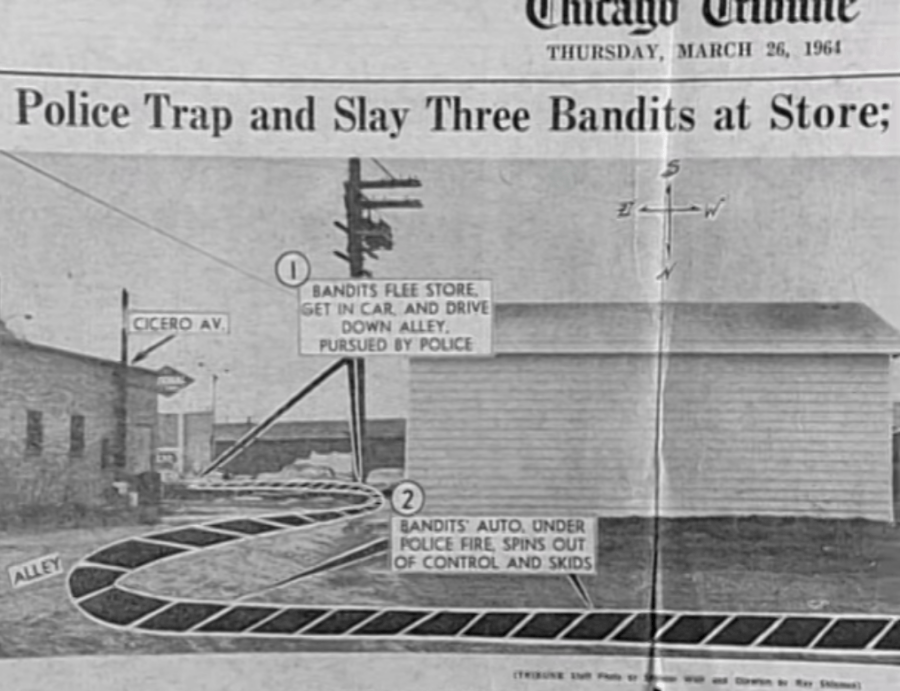 Adamson and eight other detectives learned that McCauley’s team was about to rob a supermarket. Then, around 2 p.m., in the pouring rain, Adamson saw McCauley and three others pull into the parking lot of a National Tea Company store at 4720 South Cicero Avenue.

It was the day the store was cashing its checks and an armored truck had just delivered a large sum of cash. McCauley and his regular crew had tracked the armored truck, according to Slash Film.

After the money was deposited, Neil McCauley and two other people entered the store, leaving their helmsman in the car. From his vantage point across the street, Chuck Adamson could see into the supermarket beyond the window advertisements. Customers and staff had their hands up. He told his officers to hold their fire, fearing a bloodbath.

McCauley came out with $13,137 and then he spotted the heat. Adamson and his partner approached with their weapons drawn.

McCauley opened fire on Adamson and his colleagues, who returned the favor. McCauley and his men drove to their getaway car. Taking fire and shooting at police, they sped into a back alley. But the police had blocked all potential exits and the car came to rest on the gravel surface of the driveway.

McCauley and the other three fled on foot, shooting officers before flying into an adjacent row of houses. Two of them were immediately shot and killed. Another escaped injured, only to be arrested later that day.

Adamson chased after McCauley, stalking him between the walkways of neighboring residences — those narrow spaces allowing access between individual homes. In the events announced by their previous meeting in a restaurant in Chicago, the hand holding the coffee cup on the other side of the table ended the life and criminal career of Neil McCauley. Chuck Adamson shot him six times.

The narrow space in the catwalk in which McCauley died was a few feet wide. The width was not that different from the prison cells he had occupied for most of his life.

After reading about Neil McCauley, discover the amazing true story of the Lufthansa robbery only mentioned in Freedmen. Then read the story of the outrageous Loomis Fargo heist by blameless mastermind David Ghantt.

Rian Johnson has had one of the most interesting careers of any director today. In 2005, he announced his presence with the noir thriller titled Brick, with Joseph Gordon-Levitt. 12 years later he was behind the camera on Star Wars: The Last Jedi directing Mark Hamill, Carrie Fisher and Daisy Ridley. Few modern films have […]

The Gray Man just launched worldwide on Netflix, with the Russo Brothers already hinting at Dhanush’s potential return in a sequel. Without sounding emotional, naïve or condescending, The Gray Man is an incredibly important film for Indian fans and can certainly be considered a coming out party for a modern Indian cinema superstar, Dhanush. The […]

Gal Gadot’s Upcoming Film, “Death on the Nile,” Has a Release Date

When it comes to one of the best Hollywood actresses, one name that can strike the mind of any viewer is Gal Gadot. She is one of the most popular actresses for her main superhero role in Wonder Woman. Gal Gadot has stunned the minds of all fans with his incredible performance in Fast and […]