Who doesn’t love a good gangster movie, full of over-the-top thugs, killer settings (where killer has multiple meanings) and a Don with a commanding presence? “The Mayor of Rione Sanità” carves out a niche in the gangster canon, mixing scorcese toughs with street gang mythology and a bit of cartel violence, setting it in the inspirational homeland of Naples.

Francesco Di Leva as Don Antonio in ‘The Mayor of Rione Sanità’. Photo courtesy of Film Movement Plus.

Tattooed badass Don Antonio Barracano, whose iron hand is gloved in velvet and the other wrapped in gauze of the last justice served to a rival, rules his rione (small district) with justice, or so he thinks . He’s for the little guy, though there’s a certain dishonesty in his so-called magnanimity. Claiming that society is biased against the common man, ignoring him, he is there to defend them. Moreover, as he confided to one of his acolytes, there is a lot of money to be made on the illiterate.

Don Antonio spends a lot of time in his sumptuous country house surrounded by the spoils of his work. His young daughter goes to private school and swims in the pool overlooking Naples and the sea. His son is learning the trade and has an arsenal of weapons. The Armida woman has everything she could ask for except independence and respect from her husband. Screenwriter/director Mario Martone (co-screenwriter of the adaptation of Eduardo De Filippo’s play with Ippolita Di Majo) directs masterfully from the start. Arriving at the villa late one evening, Armida gets out of her car and is attacked by Antonio’s mastiffs. Shortly after, back from the hospital where the wounds in his chest were poorly stitched up, everyone rushes to shoot the dog responsible. But Don Antonio, proclaiming that he will shoot the dog himself if, in fact, the dog was to blame, is able to twist the situation to the point of pointing out that it was really his wife’s fault for arriving. so late. The dog lives and Armida retreats, as always.

Don Antonio also has a resident doctor. Unable to sleep, he depends on Dottor Ragione for pills and advice. When Ragione informs his boss that he will soon be leaving for New York, a long trip postponed, the Don calmly informs him that if the doctor chooses to go, then a group of Dons will be met at the airport by a group of ‘partners. . The unspoken assumption is that he is unlikely to make it to the city. Not a threat, explains Antonio; a reality of the consequences of leaving.

Like the Godfather films, Don Antonio spends his days entertaining visitors who need their problems judged, whether it’s the two morons who shoot each other, the man who can no longer feed his family due to onerous interests that he has to pay on the small loan he took to pay for his daughter’s operation, or, and this is the central conflict, the young man who has come to inform the Don that he is going to kill his estranged father who l left to starve.

In each case, Don Antonio delivers street justice that rarely involves physical violence but is full of psychological pressure, with an underlying threat. One side gets satisfaction, the other not so much. But no matter what, these people, all of the non-worldly class he thrives on, know better than to go against him. 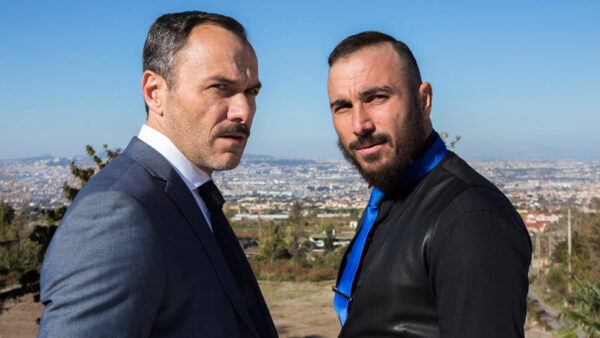 Massimiliano Gallo as Santaniello and Francesco Di Leva as Don Antonio in ‘The Mayor of Rione Sanità’. Photo courtesy of Film Movement Plus.

A much more interesting encounter, and which illustrates the battle for respect that Don Antonio must wage against the bourgeoisie, both in his own name and that of the underclass he represents, is with Arturo Santaniello, the father separated targeted for death by his son. Self-taught, he is now the wealthy owner of two successful bakeries. Brought to Don Antonio’s estate by his henchmen, Santaniello politely listens to everything Don Antonio has to say. Unfazed and fearless, Santaniello informs his host that his son has been disowned due to many wasted opportunities and lack of respect. Santaniello won’t tolerate interference from even a man as powerful as Don Antonio, but no one has ever turned down Don Antonio’s offer to mediate, and that sets up the tense finale.

It’s not a brilliant movie. No new ground is broken, and the little episodes that make up the overall story aren’t even that original or intriguing. But the portrayal of a powerful man who may have overstepped his bounds is utterly compelling. It is impossible not to get entangled in the character of Don Antonio. It’s not that we haven’t seen him before, either as a neighborhood mobster or as a turn-of-the-century Irish thug. We have. But you will rarely have the opportunity to experience a performance as captivating and explosive as that given by Francesco Di Leva playing the Don. You can’t stop staring at Di Leva as he dominates everyone around him on screen. His characterization is literally breathtaking.

Other performers of note are Daniela Ioia as Armida who subtly expresses her despair, trapped in the proverbial golden cage, but worth less than a dog. Roberto De Francesco, the doctor, is indeed world-weary knowing that the price he paid for wealth was too high. The Don’s only respected counterpart is, like Armida, unable to escape the trap he has actually set for himself. And finally, Massimiliano Gallo as Santaniello, the baker, brings the film to life with the dismissive respect he shows the Don in their powerful back-and-forth on family matters. Aware that he likely wrote his own death sentence by refusing the Don’s “help”, he is nonetheless uncompromising, representing the class that Don Antonio despises and yet yearns to belong.

In Italian with English subtitles.

Everything we know about Thor: Love and Thunder

(Photo by ©Walt Disney Studios Motion Pictures/©Marvel Studios) As Phase Four of the Marvel Cinematic Universe began with a focus on introducing new characters like Yelena Belova (Florence Pugh) in Black Widowthe Eternals in their eponymous debut feature film, and Shang-Chi (Simu Liu) in Shang-Chi and the Legend of the Ten Rings, Marvel Studios has […]

Last month brand new prequel Orphan: first murder hit theaters and stream on Paramount+ the same day, the film has so far scarred $11.6 million worldwide at the limited release box office. Countless other horror fans enjoyed the movie at home and the star Isabelle Fuhrman wants to watch it with you this weekend! Fuhrman, […]